Renwick may not have a grocery store, a bank or a school, but for the past two years, there has been a moose on Main Street. The Blue Moose Saloon, formerly the “One More?” re-opened in September 2016, after a short shutdown and a change in ownership. Open 7 days a week, the Blue Moose is a hub of activity, and the next stop by the Iowa Roadie.

Upon the advice of friends, my husband and I stopped at the Blue Moose after visiting his parents last Saturday. (Important Disclaimer: There is absolutely NO correlation between a visit with the in-laws and a visit to a small-town bar. Under no circumstances do we want to promote a misconception and possible family strife.) The Blue Moose visit was purely part of the Iowa Roadie blog project as neither of us had been there before.

We did not have an address for the Blue Moose, but in a town whose population is 242, we decided to just look for the cars…or a party bus, in this case. Per my previous blog, we entered the local dive (Rule #1) and sat at the bar (Rule #2) where we were immediately greeted by two bartenders, Deb and Sue. We were handed a basket of plastic eggs and instructed to choose one and open it. Inside were friendly bits of wisdom or coupons for free drinks. My husband’s egg contained advice reminiscent of a Chinese fortune cookie. I won two free Jello shots. Happy Easter to me!

For the record, I had never had a Jello shot before. But let me say this again…they were FREE. So Deb (or Sue?) brought over a large plastic tub filled with Jello shots. Seriously. It was like a color explosion. I selected cotton candy and banana. Yes. Banana! I opened the little plastic container, and this is where my lack of jello shot skills was evident. I asked for a spoon. Seriously. I could not slurp the jello shot, and so instead picked it up and nibbled. I realize that this is not the conventional way to do a jello shot. In fact, in most societies, it is frowned upon to eat jello with one’s hands. (Hello…do you remember jello jigglers?)

Regardless of one’s method of consumption, the jello “bites” were a hit. This was evidenced by the fact that a party bus pulled up to the Blue Moose Saloon (In Renwick. Population 242.) and proceeded to order LOTS of the aforementioned gelatin treats. I did note that contrary to my selection, banana was not a popular choice. This particular party bus was carrying a woman who was celebrating her 50th birthday. She was wearing the obligatory black birthday sash, and was involved in one of those crazy photo scavenger hunts that involved taking pictures with strangers (in this case, my husband). The group also had an affinity to dancing in a circle and singing along to Journey’s “Don’t Stop Believin’” (which now you are also humming) and all things Def Leppard. (A quick kudos and shameless plug goes out to Deb and Sue for keeping up with the order overload! Not only did they remain calm and handle the increased drink volume fabulously, they did not laugh at my lack of jello etiquette.)

The party bus departed right before the Moose’s big Easter event…Egg Roulette. Egg roulette is exactly how it sounds. One spins the wheel, picks up the egg on the corresponding number and proceeds to smash it on one’s forehead. If it is hard boiled, you move on to the next round. If it is not….well, you literally have egg on your face.

Now egg roulette is not something I would normally participate in. I am not by nature a fun person. However, my husband (probably still basking from having a stranger take a picture with him), encouraged me to try something new (evidently a banana jello shot does not count). The winner got $50, and all participants got two free drink tokens just for entering. So I donned an egg-proof parka and took my place in line. It was with great trepidation that I spun the roulette wheel and cracked that first egg on my head. Imagine my egg-citement when I realized it was hard-boiled. I wish I could say that I went on to win the $50 prize. But my luck stopped, and I was eliminated in the second round, basking in a newfound adventuresome spirit and the glow of runny egg yolk.

Finally I want to point out that the Blue Moose serves a variety of flavored Moscow Mules; and while they do not serve sandwiches, they offer a selection of fried foods and frozen pizza. We, ourselves, enjoyed both a giant sampler platter and a pizza. (I TOLD you to wear elastic pants!) Additionally besides egg roulette, the Blue Moose hosts other special events…including the upcoming “Fifty Shades of Bacon” (that’s right…50 shades of BACON) on April 7 at 5 pm. Fifty shades is a bacon cook off with prizes awarded to the top three entries. It is with great regret that I cannot return to the Blue Moose for this bacon event. Instead I will be volunteering at our local high school’s post prom celebration…after which I will probably need some more of those banana jello bites. 🙂 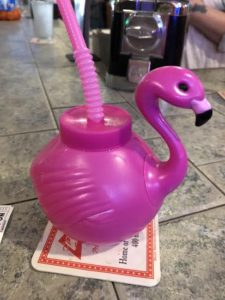 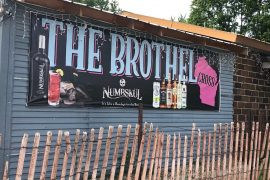 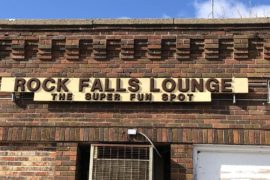