(Note: This is the first in a two-part series about an Iowa Roadie adventure in Buffalo County, Wisconsin.)

I recently celebrated my birthday.

I must admit that once you hit a certain age, one really does not “celebrate” a birthday as much as “commiserate” it. After all, I already have my driver’s license, voter registration card and a legal ID. The allure of pinatas and ‘pin the tail on the donkey’ have diminished in direct proportion to my memory. And I’m afraid if I tried to muster the energy to blow out my candles, I’d pass out for lack of oxygen. (My husband would disagree and tell you I have enough hot air to assist a centenarian.) The only bright spot is the cake and ice cream…which is also a no-no, according to my doctor who recently classifed me as “mildly obese” following my annual physical.

So all things considered, a birthday in middle age is just another day…or an excuse for a new Iowa Roadie adventure. First I want to give kudos to my husband who, along with taking me on another crazy excursion, also presented me with a Christmas gift bag (It’s JUNE!) containing a hand held Burger Time game lovingly purchased off of ebay. I ask…what lady does not want a portable arcade game (particularly one featuring deadly hamburger patties) instead of jewelry or flowers? Roses will wilt…but as long as I have double A batteries on hand, I can build electronic hamburgers forever.

Following a day which included a visit to the Harmony (Minnesota) Spirits distillery and a tour of old Amish country, we were headed to the Waumandee House Resort in Buffalo County, Wisconsin where we had reservations for the evening. There were several detours along the way, and we found ourselves on winding County Road M which, according to google maps, was “still the fastest route.” Within 30 minutes of our destination and seemingly in the middle of nowhere, we passed a tree that had a single wooden sign tacked to it. The sign heralded one simple word… BAR. And behind the tree was a small, shack-like building proclaiming the BAR’s actual name…The Brothel. No way could we just drive by this! It was a little pub oasis in the middle of dairy country. My husband made a U-turn (no longer “the fastest route”), and we arrived at The Brothel for a birthday drink.

Upon entering the bar, we were greeted by a giant black lab named Chuck, who was The Brothel’s self-proclaimed mascot and floor custodian, as he was quite pleased to clean up popcorn that patrons dropped. Personally I believe there is a certain “something” that can only be accomplished by having a canine in the bar. The Guns & Roses music only added to the ambience. A hair band and a hairball…this is the stuff memories are made of.

As usual, we found two seats at the bar where owner Steve served me a drink made with pineapple whiskey. Did you catch that? Pineapple Whiskey! This was a surprisingly refreshing tropical beverage that counteracted my husband’s PBR choice. (We were in Wisconsin, and he didn’t even order a Spotted Cow! Had it not been for that thoughtful Burger Time gift, I might have doubted his sound judgement and decision making skills.)

While visiting with bartender Steve, he shared that he is a former engineer who had traveled throughout Europe, but quit his job and moved to Wisconsin a few years ago. (This is where I began to question STEVE’S decision making ability.) He decided to purchase this property that includes his home and the bar. The house where Steve resides was actually a brothel in the 1800’s (hence the bar’s name), while the bar is the back half of a larger bar and dance hall that burned down decades ago. Prior to officially becoming a public tavern, the building served only as Steve’s man cave. But unemployed Steve decided he needed to generate some income, and consequently converted his man cave into The Brothel Bar. Congratulations to Steve on a successful first year of business!

Besides Steve, we had the pleasure of visiting with a retired school teacher who recalled riding a tractor across the field to get to the bar when it used to be a dance hall. Farm equipment is always an acceptable mode of transportation, and she should be commended for her resourcefulness.

We also met a couple who arrived at The Brothel by motorcycle. The wife was monitoring the weather as her daughter was attending a local outdoor country music festival. The woman informed us that her daughter really enjoyed concerts, and that she (and her teenage friends) were selected by a popular country singer to dance naked for him in his tour bus. I must confess that I was unclear as to what the appropriate response should be to that revelation. Although my first instinct was to throw up, I instead asked who the singer was. And while I will not divulge his name…let’s just say I may not be watching American Idol again.

For those of you who have visited Wisconsin before, you know that ‘bar dice’ is basically a dive bar institution. (We are told it is actually illegal, but I think the practice is comparable to jaywalking or eating a package of double stuff oreos by yourself. You know it’s wrong, but you do it anyway.) Bar dice often use a rubber cup–like the one in yahtzee–covered in fake leather. When rolling the dice, there is an unspoken rule that one slams the cup down very heartily. It is like a testament to testosterone. There is also an unspoken bar dice etiquette which states that when passing the dice to someone else, the dice cannot be in the special cup. Let me just say that I took college finals less complicated than this!

While there are different dice games, the most common is “Shake A Day.” Basically you have to get a yahtzee (all five numbers the same) in three rolls. Prizes can range from a free drink to money. And as the name suggests, you only are allowed to play once a day. (Clarification…You can play once per day at each bar you visit. As Wisconsin has more bars than any other state, you can just go a few miles down the road and try again.)

Anyway, The Brothel offered both “shake a day” and another dice game allowing one to win a bucket of pull tabs. I wish I could say that I left with some extra cash or a free drink, but unfortunately both my husband and I were Big Losers. Besides bar dice, The Brothel offered a plethora of other gambling activities including a gun raffle and something called “chicken shit bingo.”

To play chicken shit bingo, you simply purchased a number. These numbers are painted on the hood of an old car, and when all the numbers are purchased, a chicken is released. Whatever number the chicken poops on, is the winner. Tell me…what is better than a game in which the outcome is determined by a bird’s fecal matter? Winner, winner, chicken dinner!

The Brothel also features a sand volleyball pit, frozen pizza, and porta potties. Somehow these things all work together to add to The Brothel’s backroads charm. Yet, as delightful as it was at The Brothel (words I thought I would never say!), we needed to be on our way and check into our cabin at the Waumandee House Resort.

I feel the need to first clarify that the term “resort” is used quite loosely here. There are no spa sessions or pampering pedicures. The Waumandee House is a bar & grill that is more than 100 years old. The “resort” is a handful of modern cabins out back. And the tiny town of Waumandee itself consists only of a bank, a church, a small store and a few other homes and scattered buildings. It is all very quaint and picturesque in the midst of the rolling hills of Wisconsin.

As it was National Dairy Month, the Waumandee House was offering free “frosty mugs of milk” to all patrons. My husband instead ordered a “frosty mug of PBR.” Not free. Besides a delicious sangora hot dog (I mistakenly read the sign as “sangria” and admit that I was a tad disappointed), Owner/Chef Dan makes a wonderful breakfast.

One of my favorite things about the Waumandee House was the coin game. This is a machine that is filled with quarters, and entices you to drop more quarters through a slot in the hope of pushing other coins out. I should have learned my lesson with the bar dice. Do not expect an Iowa Roadie adventure in Vegas any time soon.

My husband and I also made a quick visit to the Top Hat Bar in Nelson, Wisconsin. Besides a PBR sign, the Top Hat tempts visitors with a large Blatz sign. Who can resist a Blatz sign? It’s kind of like the Loch Ness Monster or Bigfoot of beer signs. Lots of excitement but very few sightings. Additionally the Top Hat received a glowing recommendation from a gentleman coming out of the liquor store, who advised us not to miss the bar’s “great taxidermy.”

So surrounded by expertly-stuffed and mounted wildlife, we closed our evening with another disappointing round of bar dice at the Top Hat. Therefore I have decided that from now on I will stick to my Burger Time game where I currently hold the high score.

Or at least I do until someone else plays. 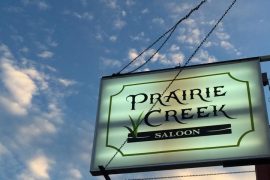 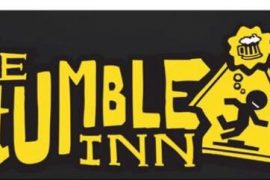 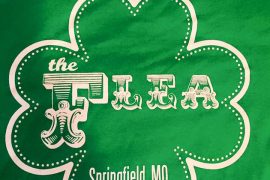 An Itch You Can’t Get Rid Of…Destination: The Flea (Springfield, Missouri)